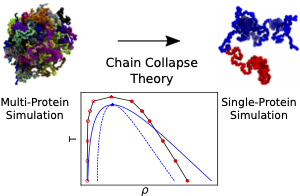 Recent advances in microscopy of living cells have established membraneless organelles as critical elements of diverse biological processes. The body of experimental work suggests that formation of such organelles is driven by liquid−liquid phase separation, a physical process that has been studied extensively for both simple liquids and mixtures of polymers. Here, we combine molecular dynamics simulations with polymer theory to show that the thermodynamic behavior of one particular biomolecular condensate--fused in sarcoma (FUS)--can be quantitatively accounted for at the level of the chain collapse theory. First, we show that a particle-based molecular dynamics model can reproduce known phase separation properties of a FUS condensate, including its critical concentration and susceptibility to mutations. Next, we obtain a polymer physics representation of a FUS condensate by examining the behavior of a single FUS protein as a function of temperature. We use the chain collapse theory to determine the thermodynamic properties of the condensate and to characterize changes in the single-chain conformation at the onset of phase separation. Altogether, our findings suggest that the phase behavior of FUS condensates can be explained by the properties of individual FUS proteins and that the change in the FUS conformation is the main force driving for the phase separation

Animation illustrating a coarse-grained molecular dynamics simulation of 64 WT FUS proteins at 292 K, forming a liquid-like droplet after about one microsecond..