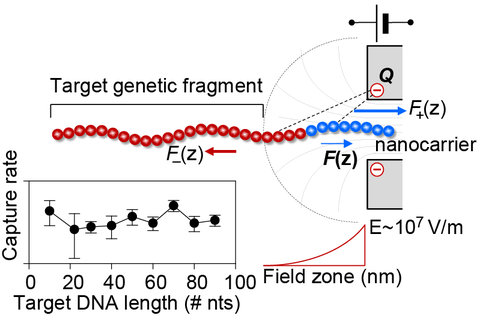 The motion of polarizable particles in a non-uniform electric field, i.e., dielectrophoresis, has been extensively used for concentration, separation, sorting, and transport of biological particles, from cancer cells and viruses to biomolecules such as DNAs and proteins. However, current approaches to dielectrophoretic manipulation are not sensitive enough to selectively target individual molecular species. Here we describe the application of the dielectrophoretic principle for selective detection of DNA and RNA molecules using an engineered biological nanopore. The key element of our approach is a synthetic polycationic nanocarrier that selectively binds to the target biomolecules, dramatically increasing their dielectrophoretic response to the electric field gradient generated by the nanopore. The dielectrophoretic capture of the nanocarrier-target complexes is detected as a transient blockade of the nanopore ionic current while any non-target nucleic acids are repelled from the nanopore by electrophoresis and thus do not interfere with the signal produced by the target’s capture. Strikingly, we show that even modestly charged nanocarriers can be used to capture DNA or RNA molecules of any length or secondary structure and simultaneously detect several molecular targets. Such selective, multiplex molecular detection technology would be highly desirable for real-time analysis of complex clinical samples.