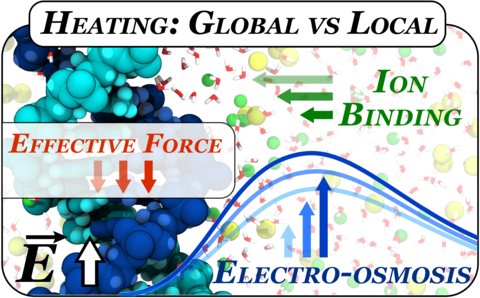 The integration of local heat sources with solid-state nanopores offers new means for controlling the transmembrane transport of charged biomacromolecules. In the case of electrophoretic transport of DNA, recent experimental studies revealed unexpected temperature dependences of the DNA capture rate, the DNA translocation velocity, and the ionic current blockades produced by the presence of DNA in the nanopore.  Here, we report the results of all-atom molecular dynamics (MD) simulations that elucidated the effect of temperature on the key microscopic processes governing  electric field-driven transport of DNA through nanopores. Mimicking the experimental setup, we simulated the capture and subsequent translocation of short DNA duplexes through a locally heated nanopore at several temperature and electrolyte conditions. The temperature dependence of ion mobility at the DNA surface was found to cause  the dependence of the relative conductance blockades on temperature. To the first order, the effective force on DNA in the nanopore was found to be independent of temperature, despite a considerable reduction of solution viscosity. The temperature dependence of the solution viscosity was found to make DNA translocations faster for a  uniformly heated system but not in the case of local heating that does not affect viscosity of solution surrounding the untranslocated part of the molecule. Increasing solution temperature was also found to reduce the lifetime of bonds formed between cations and DNA. Using a flow suppression algorithm, we were able to separate the effects of electro-osmotic flow and direct ion binding, finding the reduced durations of DNA--ion bonds to increase, albeit weakly, the effective force experienced by DNA in an electric field. Unexpectedly, our simulations revealed a considerable temperature dependence of  solvent velocity at the DNA surface---slip velocity, an effect that can alter hydrodynamic coupling between the motion of DNA and the surrounding fluid.