In situ structure and dynamics of DNA origami determined through molecular dynamics simulations. 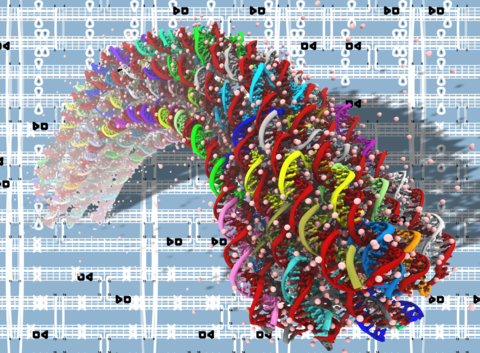 These animations illustrate the dynamic nature of a DNA origami structure. Each simulation shows the conformation of a DNA layer in a three-layer  honeycomb structure observed during 130 nanoseconds of molecular dynamics. The backbone and bases of DNA are shown as tubes; each DNA strand is show using a unique color. Basepairs from the non-peripheral region of the structure that remained broken for 10 nanoseconds or more are highlighted using the vdW (spheres) representations. In frame zero, the circle indicates a basepair that was observed to break and reform during the simulation.

This animation illustrates equilibrium fluctuations of a three-layer honeycomb structure observed during a 130 ns molecular dynamics simulation. The DNA origami structure is shown using a  color-coded chicken wire representation. The wireframe (black lines) connects the centers of mass of the DNA basepairs that form continuous double-stranded DNA cylinders in the original DNA origami design. The lines between the centers of mass of the same-index basepairs connect the wireframe. The length of the lines indicate the local inter-DNA distance, which is color-coded from blue (short distance) to red (long distance).

Equilibrium fluctuations of a honeycomb structure featuring a 90-degree programmable bend. The animations covers 30 ns of a molecular dynamics simulations; the simulation system contains over 3 million atoms. The DNA origami structure is shown using a  color-coded chicken wire representation; water and ions are not shown. During the simulation, the local structure of DNA origami undergoes considerable fluctation; the bend angle of the structure remains close to 90 degrees.

This animation illustrates a simulation protocal that was used to produce a 90-degree bend in a honeycomb structure.  Initial all-atom structure constructed by converting the caDNAno design  to all-atom coordinates.  During the first 2 ns of equilibration, all non-hydrogen atoms of DNA bases were restrained to their initial coordinates; magnesium ions migrated to their equilibrium locations within the DNA origami structure.  A bend in the structure was produced by allowing the DNA helices to expand and shrink according to the insertions and deletions introduced in the design. To preserve the local order of the structure, the distance between non-hydrogen atoms of the DNA bases within 10 Å was restrained. Such elastic-network-like restraints were realized by introducing harmonic bonds using the extra bonds feature of NAMD. The restraints were removed in two steps  producing the programmed 90 degree bend in the absence of the restraints.