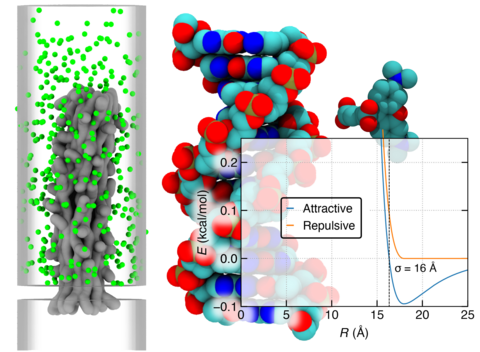 Designed and engineered protein and DNA nanopores can be used to sense and characterize single molecules and control transmembrane transport of molecular species. However, designed biomolecular pores are less than 100 nm in length and are used primarily for transport across lipid membranes. Nanochannels that span longer distances could be used as conduits for molecules between nonadjacent compartments or cells. Here, we design micrometer-long, 7-nm-diameter DNA nanochannels that small molecules can traverse according to the laws of continuum diffusion. Binding DNA origami caps to channel ends eliminates transport and demonstrates that molecules diffuse from one channel end to the other rather than permeating through channel walls. These micrometer-length nanochannels can also grow, form interconnects, and interface with living cells. This work thus shows how to construct multifunctional, dynamic agents that control molecular transport, opening ways of studying intercellular signaling and modulating molecular transport between synthetic and living cells.

Multi-resolution equilibration of DNA pore embedded in a lipid bilayer membrane. Starting from the caDNAno design, the DNA nanopore was simulated at 1 bead per four base pair resolution for the first 20 μs, followed by an 8 μs simulation at 1 bead per nucleotide resolution. In the first part of the movie, which corresponds to the 1 bead per 4 base pair simulation, the DNA nanostructure is represented using light grey lines. In the second part of the movie, which corresponds to the higher-resolution DNA model, the DNA nanostructure is drawn a using the VMD’s Quicksurf representation, with resolution of 1 Å and the radius scale of 3.8 Å. The unfolded scaffold of the DNA origami is not shown. A planar potential applied at the bottom of the nanopore to represent the incorporation of the nanopore into the lipid bilayer membrane; the potential is shown using the RWB color map.

Brownian dynamics simulation of dye diffusion through the DNA pore. The movie illustrates a representative 150 μs Brownian dynamics simulation of 396 dye molecules (green) diffusing through and around a nanopore embedded in a membrane. The interaction of DNA with the dye is described using a truncated LJpotential with σ = 16 Å. The DNA nanopore is represented using a static grid-based interaction potential and a local diffusivity map. The microscopic configuration of the DNA nanopore structure obtained at the end of the multi-resolution equilibration (Supplementary Movie 4) was used to generate this grid-based representation of the membrane-nanopore system. The DNA nanostructure is drawn using a 1 kcal mol –1 isosurface of the dye—DNA potential map (grey).