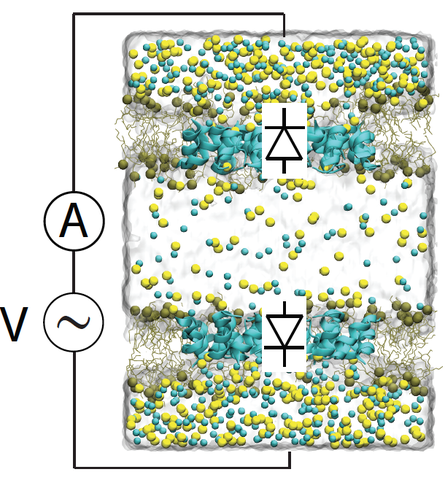 Biological molecular machines perform the work of supporting life at the smallest of scales, including the work of shuttling ions across cell boundaries and against chemical gradients. Systems of artifi cial channels at the nanoscale can likewise control ionic concentration by way of ionic current rectifi cation, species selectivity, and voltage gating mechanisms. Here, we theoretically show that a voltagegated, ion species-selective, and rectifying ion channel can be built using the components of a biological water channel aquaporin. Through all-atom molecular dynamics simulations, we show that the ionic conductance of a truncated aquaporin channel nonlinearly increases with the bias magnitude, depends on the channel’ s orientation, and is highly cation specific but only for one polarity of the transmembrane bias. Further, we show that such an unusually complex response of the channel to transmembrane bias arises from mechanical motion of a positively charged gate that blocks cation transport. By combining two truncated aquaporins, we demonstrate a molecular system that pumps ions against their chemical gradients when subject to an alternating transmembrane bias. Our work sets the stage for future biomimicry eff orts directed toward reproducing the function of biological ion pumps using synthetic components.

Animation illustrating a 40 ns simulation of the truncated AQP gating mechanism. The truncated AQP monomer is shown in green licorice, the Arg-197 gate in red licorice, and the lipid bilayer in orange lines. The crystallographic position of the Arg-197 gate is shown in translucent blue licorice. The direction of electric eld from applied bias is indicated by the arrow, which changes color to emphasize changes in polarity. Na+ is shown as yellow spheres, Cl- as cyan spheres.

Animation illustrating a 960 ns simulation of the double-membrane truncated AQP ion pump subject to an alternating transmemrbane bias. The movie consists of 26 still frames, each 38.4 ns apart, as the motion of ions makes an ordinary frame rate hard on the eyes. The truncated AQP tetramers are shown in cyan cartoon, the POPE lipid bilayer in brown lines and spheres, Na+ in yellow spheres, and Cl- in cyan spheres. The anode chamber, which loses the majority of its ions, is here depicted sandwiched between the two membranes.