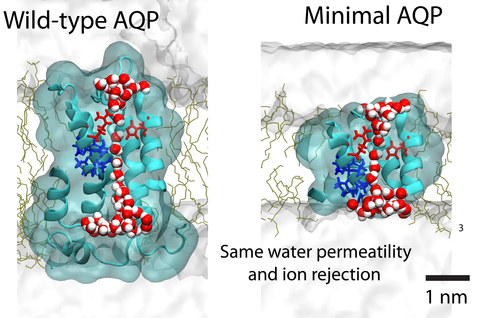 Aquaporin (AQP) proteins function as highly efficient water transport channels that support homeostasis in many types of living cells. Their structure-function relationships have been characterized extensively in fundamental and applied research, primarily via structural analysis, mutational studies, and computational approaches. The present study evaluates the effects of progressive truncations on the permeability and ionic conductivity of AQP-1 (bovine). The use of truncations to determine critical features has not been considered previously, as physical truncation of AQP is likely not technically feasible due to the ornate arrangement of six interwoven alpha helices in a single pore structure. However, structures not obtainable through protein assembly can be realized via synthetic chemistry approaches and studied using molecular dynamics (MD) simulations. Here, we apply the MD method to characterize the permeability of AQP variants truncated along the pore axis from both cytoplasmic and extracellular sides of the channel. The simulation results suggest that AQP-1 can retain its function even after deletion of up to 50% of the channel’s length, representing 50% of proteins’s molecular mass. Deletions such as these are expected to greatly simplify future biomimicry efforts of reproducing the AQP functionality using synthetic macromolecules. This study demonstrates the potential of in silico approaches to support the creation of streamlined functional analogs of biological molecular machines.