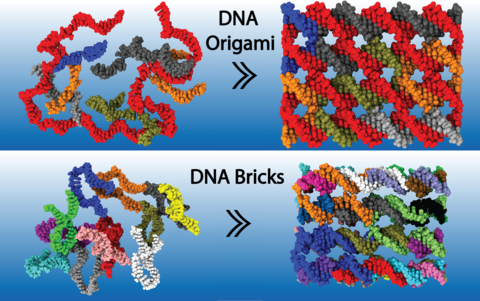 The DNA bricks method exploits self-assembly of short DNA fragments to produce custom three-dimensional objects with subnanometer precision. In contrast to DNA origami, the DNA brick method permits a variety of different structures to be realized using the same library of DNA strands. As a consequence of their design, however, assembled DNA brick structures have fewer interhelical connections in comparison to equivalent DNA origami structures. Although the overall shape of the DNA brick objects has been characterized and found to conform to the features of the target designs, the microscopic properties of DNA brick objects remain yet to be determined. Here, we use the all-atom molecular dynamics method to directly compare the structure, mechanical properties and ionic conductivity of DNA brick and DNA origami structures different only by internal connectivity of their consistituent DNA strands. In comparison to equivalent DNA origami structures, the DNA brick structures are found to be less rigid and less dense and have a larger cross-section area normal to the DNA helix direction. At the microscopic level, the junction in the DNA brick structures are found to be right-handed, similar to the structure of individual Holliday junctions (HJ) in solution, which contrasts with the left-handed structure of HJ in DNA origami. Subject to external electric field, a DNA brick plate is more leaky to ions than an equivalent DNA origami plate because of its lower density and larger cross-section area. Overall, our results indicate that the structures produced by the DNA brick method are fairly similar in their overall appearance to those created by the DNA origami method but are more compliant when subject to external forces, which likely is a consequence of their single crossover design.

Video summary of results, with an introduction to DNA self-assembly and brief descriptions of the design rules of DNA origami and DNA bricks. The video covers our results on structural and mechanical differences, as well as the differences in ionic conductivity.